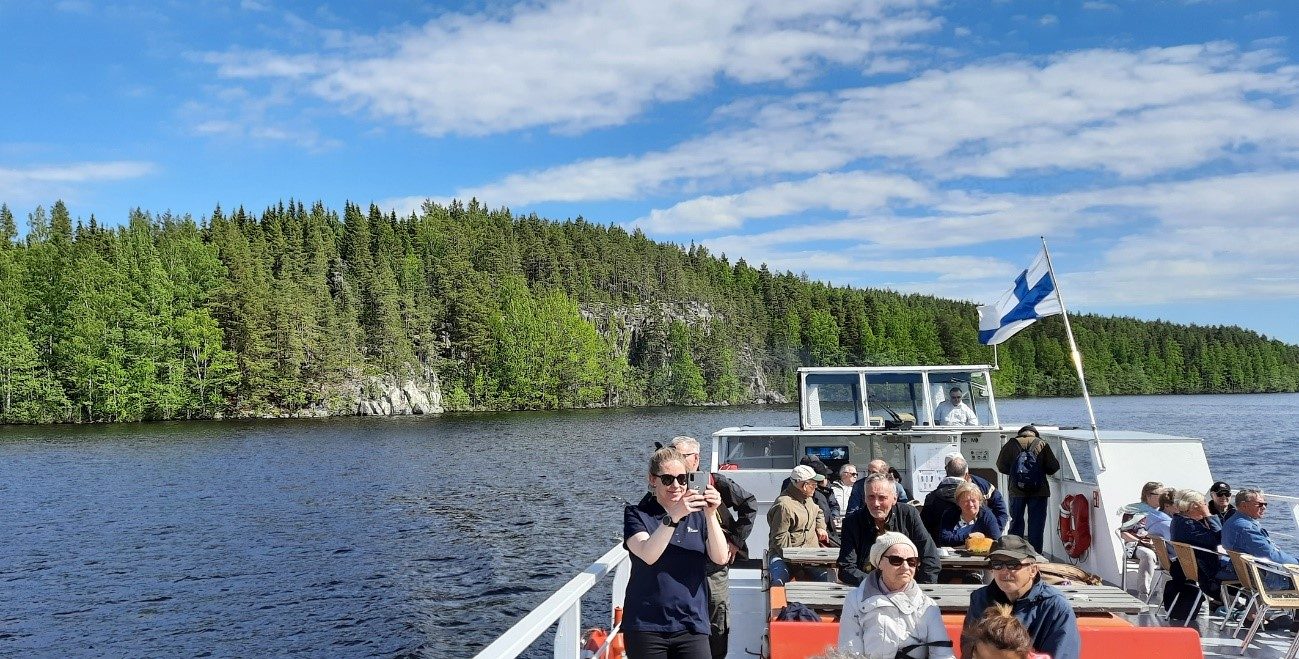 The seminar ‘Rock Art on the Water’, held by the Finnish cities of Laukaa and Mikkeli, served to transfer expert knowledge about the future management of the large rock art sites in the region of the great lakes (Saraavesi and Saimaa) in Finland.

Finnish rock art is one of the best-kept secrets of European cultural heritage. Since the late 1960s, after the different sites began to be discovered, mainly on the shores of lakes in the centre and south of the country, they gradually began to be studied at the turn of the century. In the absence of a research tradition, with mostly local publications and little institutional awareness of the real value of prehistoric art, the social and political appreciation of this heritage has still to be achieved in Finland.
This prehistoric cultural heritage is still largely unknown by the inhabitants of the country, and even more so at an international level. Indeed, visits to the sites are very rare and the infrastructures for the visualisation of the art with acceptable safety standards, as regards both the rock art and visitors, either are very modest and limited or do not exist. 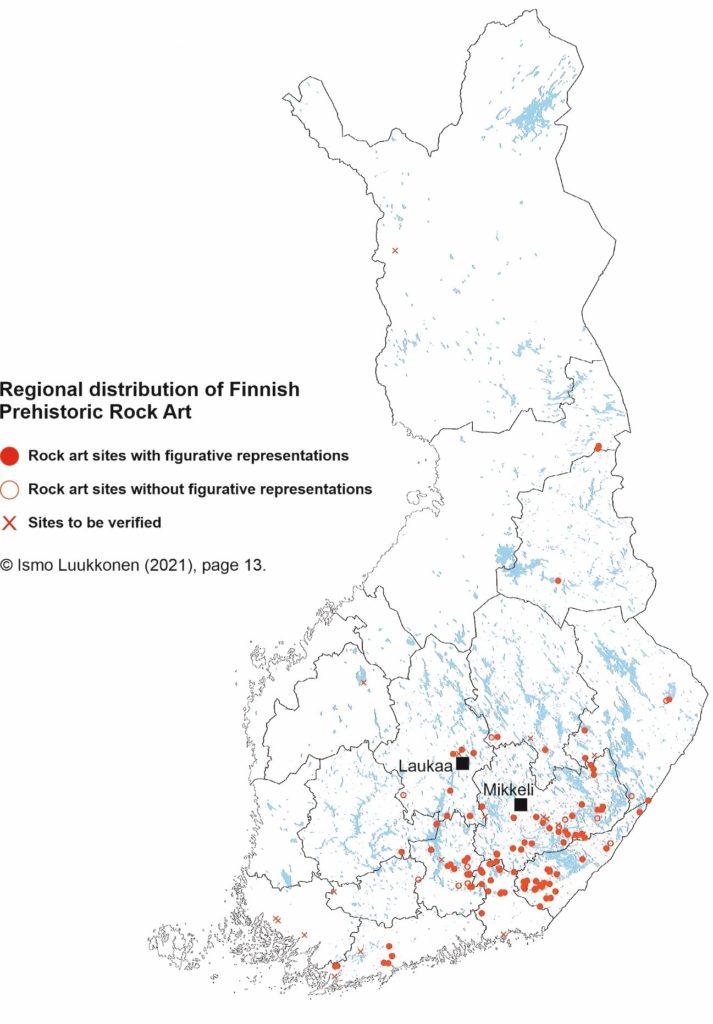 Although some catalogues have been published, and some sites have been studied in certain detail (Professor Pekka Kivikäs’s research at Saraakallio and Astuvansalmi, among other sites, should be highlighted) and this rock art was even included on Finland’s tentative list for its designation as World Heritage by UNESCO, this prehistoric art has still to be addressed by Finnish Cultural Heritage researchers and managers. This is especially the case when it is compared with the interest and degree of integral management devoted to sites in such countries as Norway, Sweden, Portugal, Spain, Italy, France and Azerbaijan, to mention only the countries in the Council of Europe with rock art sites in UNESCO’s World Heritage List.

The great art of the Finnish lakes
Among the dozens of places with prehistoric paintings on the shores of the great lakes in the centre of Finland, two large sites stand out: Saraakallio, in Laukaa, and Astuvansalmi, in Mikkeli. In both cases, these are large walls of rock over the water, where communities of Mesolithic hunter-gatherers and the first Neolithic farmers painted large panels in red, visible hundreds of metres away on the water. 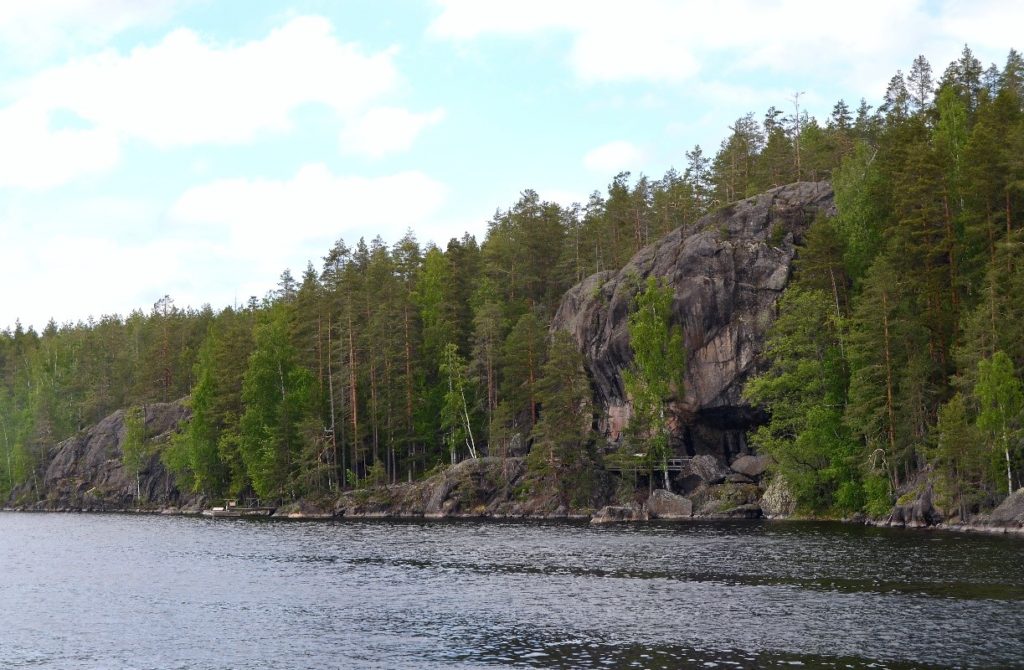 Painted figures of elks, deer, men and women carrying out different tasks, stains of colour and even handprints form a large pictorial repertory created with different techniques (series of dots, colour-wash, painted lines, etc.) all in different shades of red ochre. These artistic representations are currently dated between 6500 and 3500 BP, although some authors suggest slightly early chronologies. 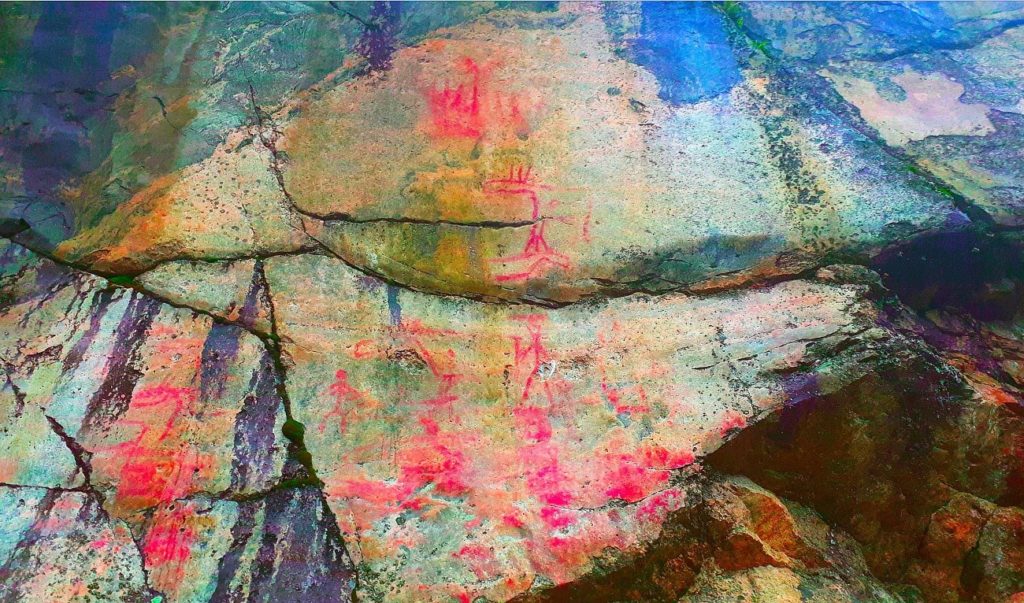 The beauty and excellent conservation of the environment in which these sites are located, the lakes and the endless forests of conifers and birch, are another attraction that should not be ignored because they perfectly represent the setting for the decorated sites during the first phases of the human occupation of Finland, after the Arctic Ice Cap retreated towards the north at the end of the Ice Age. As a curiosity, it is worth adding that Lake Saimaa is the home of the only species of freshwater seal, and the forests all around contain significant populations of forest reindeer, glutton, bear, wolf and, above all, elks.

The management of the sites and their tourist use

Unlike other Council of Europe countries, like Norway, Portugal, Spain, France, Italy and even Azerbaijan, no model has been defined for the management of rock art sites in Finland. Most of the sites are in private property, even though, because they are on the lake shores, they can be visited by boat. However, there is rarely any educational or information support, any modern structures allowing the physical access to the decorated panel or specific organised visits with a defined calendar, apart from the tourist boats that approach the panels so that visitors can see the ‘curiosity’ of the prehistoric paintings. 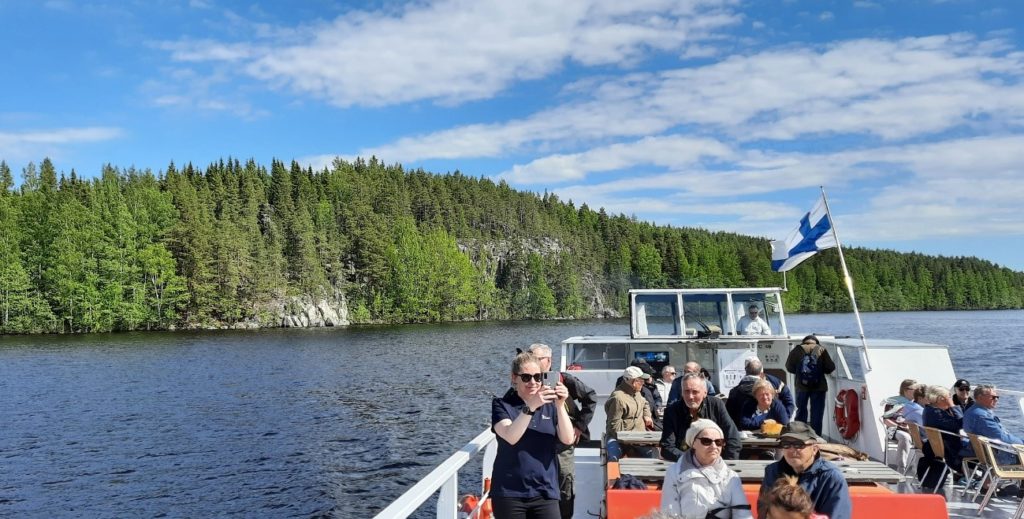 Visit to Saraakallio by boat.

Aware of this, the town corporations of Mikkeli first and Laukaa soon after took the initiative of joining the Council of Europe Cultural Route ‘Chemins de l’Art Rupestre Préhistorique -Prehistoric Rock Art Trails’ PRAT-CARP  to seek the collaboration of the route and learn from the successful experiences in other regions where rock art has been a specialised tourist resource for over a century, such as Cantabria (Spain) and Dordogne (France), or in places that have developed this resources more recently, like Vale do Côa (Portugal), Valcamónica (Italy) and the Gobustan Reserve (Azerbaijan).

After the break imposed by the COVID-19 pandemic, in late 2021, the organisation Visit Mikkeli Ltd contacted the other members of the PRAT cultural route to propose holding a technical seminar in the sites of Saraakallio and Astuvansalmi in collaboration with the corporations of Mikkeli and Laukaa. This would allow the members of PRAT-CARP in other countries to see the sites for themselves and, at the same time, the Finnish institutions would learn the options for the work that needed to be done to present the rock art sites to the public in the best possible conditions. 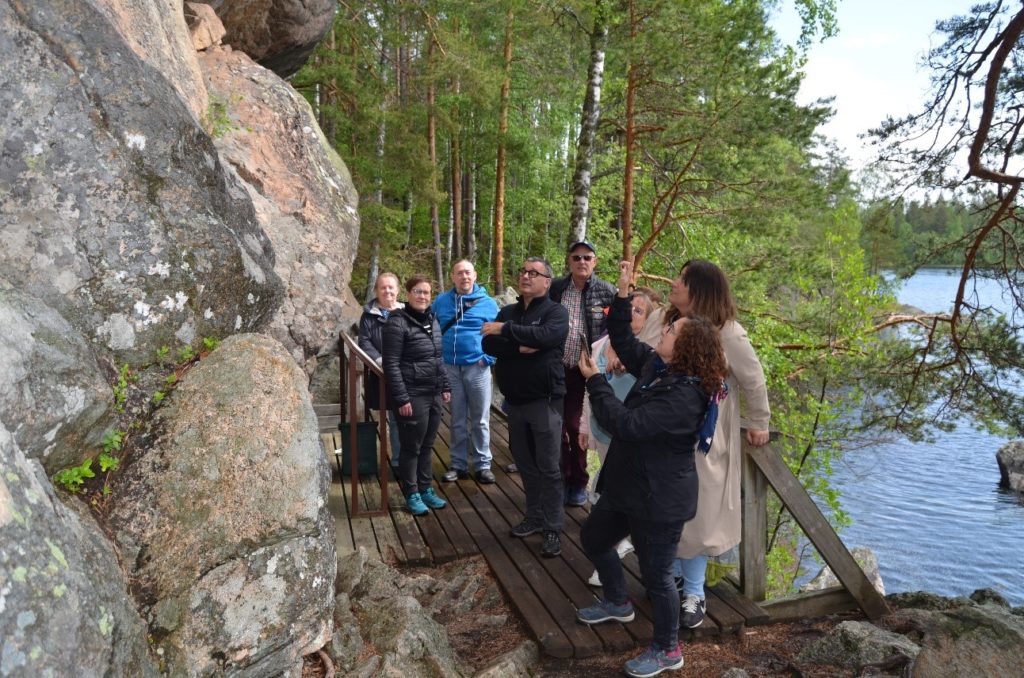 Guided visit to Astuvansalmi during the seminar.

The seminar
The first two days were devoted to the fieldwork: technical visits to the sites of Saraakallio and Astuvansalmi so that experts from several countries could see the current situation of the Finnish rock art sites, their archaeological character and the issues for their conservation and public access. They were also able to appreciate the model of tourist visit based on viewing the panels from boats.

In the case of Saraakallio, the paintings are not accessible and visitors can only observe them from a boat at a distance that does not allow a clear view. At Astuvansalmi tourists can disembark and see the paintings from a precarious wooden gangway that at least enables many of the numerous paintings to be viewed. A modest information panel provides some explanations about them.

The sessions on 9 June took place in the auditorium of the War and Peace Centre in the town of Mikkeli. Different models for the management and tourist uses of rock art in Europe were presented, especially the experiences of Vale de Côa (Douro region, Portugal) and the Vèzére valley (Dordogne, France), where water plays a major role in the visits to the rock art sites.

The latest models for the exhibition of the phenomenon of prehistoric art in different countries were also presented: from Norway to Azerbaijan, including such regions as Valcamónica (Italy) and Cantabria, Extremadura and the east of the Iberian Peninsula (Spain). 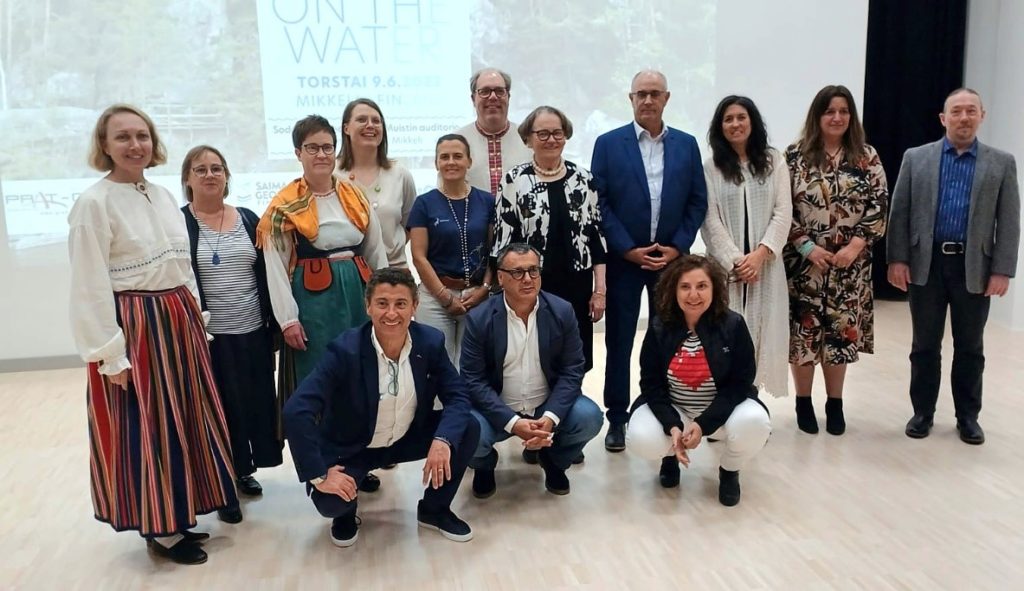 Lecturers and organization team during the session at Muisti Centre of War and Peace.

In the second part of the seminar, the rock art of Finland was approached from different points of view. These included not only archaeological and ethnographic aspects but also a presentation about the culture and world of the shamans in the Sámi nation.
The main result of this international meeting was the agreement to establish an international technical committee to support the authorities of Laukaa and Mikkeli in the development of a large multi-disciplinary project, consisting of three phases.

During the seminar, the vice-president of the Council of Europe Cultural Route CARP-PRAT, Dr Aida Carvalho (president of the Fundación Côa Parque, Portugal) and the secretary of this rock art route, Mr Leoncio Carrascal (president of the Red Cántabra de Desarrollo Rural) delivered the representatives of Laukaa, Ms Linda Leinonen, and Mikkeli, Ms Pirjo Siiskonen, with the official plaques of the PRAT-CARP route, which identify the two prehistoric sites of Saraakallio and Astuvansalmi as rock art destinations of the Council of Europe. 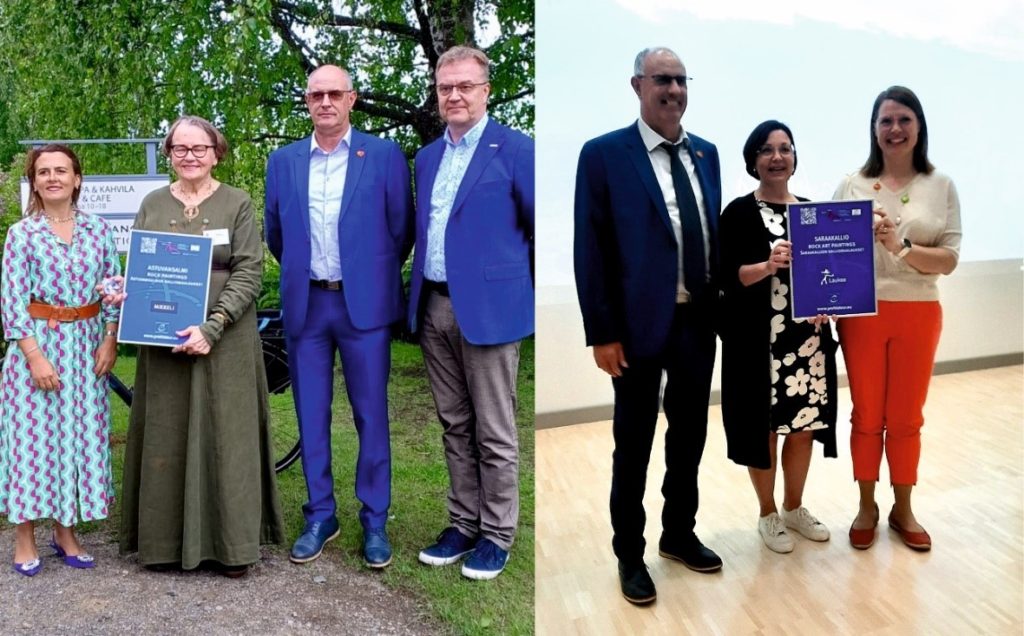 Official deliver of the European Rock Art signs to the representatives of Mikkeli and Laukaa.

View all posts by gestor-web-carp →